The howling wind whipped the snow into flurries but did little to mask the roars of bears beyond the camp, one of a fully grown specimen, the other on the far side a cub. Aethed Elindan and Mithrielye watched and waited as bear paws thumped on the ground, big bear paws… Aethed stacked the fire high hoping to scare the creature away; a plan which may have worked had the party not started arguing about the nature of bears. Mithrielye believed it to be a noble guardian of the forest that would cause them no harm, while Aethed strongly argued a hungry bear was likely to try and eat them. Their conviction clear in their beliefs was inspirational, but the bear just heard noise, the kind of noise food makes.

Aethed was proven right as the full grown bear came charging into camp. The warrior and Pyram the Priest closed in on the beast while Mithrielye singed it with a fire bolt. Who’d have thought moving to close combat with an 8″ tall bear could be so bad for your health? It took a couple of swipes at Pyram, tearing into his flesh while Aethed tried to lure the creature nearer the fire, hoping it would fall in. Although this tactic failed a combination of force bolts and a coating of lamp oil saw the poor animal enveloped in flames, running a short distance from the camp before collapsing – dead.

A+ for a proper old school ingenuity and bear stakes for breakfast saw their spirits lifted, and after a decent rest and a smattering of healing for Pyram, they set off on the final leg of their journey to Hellwinter Keep.

The rain now turned to snow, the heroes struggled on towards Hellwinter, climbing ever higher along treacherously steep and narrow mountain paths. Despite taking great care Mithrielye lost her footing and tumbled from the path dropping 20 feet to a ledge below; her luck held as she landed on tough mountain grass, softening the fall. Many hours later the tower of Hellwinter Keep came into view, their journey close to an end.

Aethed nimbly scaled the courtyard wall and opened the gates. Within the desolate area with it’s drifts of snow and unswept paving stones are hints of neglect, not the warm welcome from Sir Gallaharn Kairn they were expecting. A graveyard to one side has many worn gravestones, and of those one with readable engravings stands out – Sir Deckar Kairn, an ancestor of Sir Gallaharn. No attention had been paid to this grave for some time; why has Sir Gallaharn completely neglected his ancestors resting place?

There is little else to explore in the courtyard, a well of no obvious consequence which our heroes chose to ignore and a stable door. Mithrielye ventured into the stable out of the snow, trying to pierce the depth of the shadows when the torn and bloody remains of a warhorse comes charging out. Shreds of flesh cling to bone and part of the poor creatures jaw is missing; there is no life in it’s eyes yet it charges at the adventurers. Blocking the door into the courtyard Aethed and Pyram take mighty swings at the undead nightmare, bringing it to halt in short order. The mystery of this place grows. Where is Sir Gallaharn and why the hell is there an undead horse? 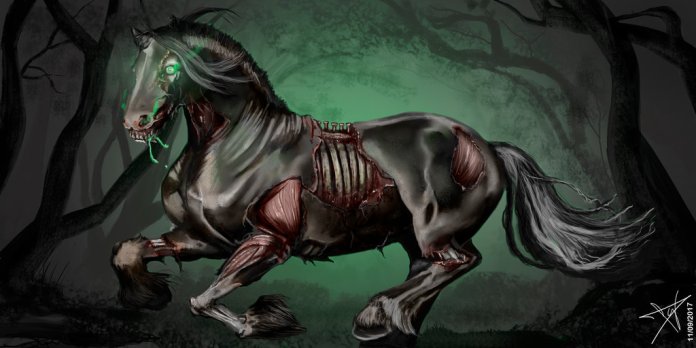 A broken door leads from the courtyard into the tower itself and the heroes proceed onwards through it with due caution. Beyond is a common room, cold and damp with a large fireplace, engraved with a heraldic device of a Black Dragon belonging to a long forgotten order of knights. A ruined oak table fills the room while cutlery and dishes are scattered about. Two doors lead from this room while a staircase leads up to the next level.

Before the party can decide on their next step we have to call it a night. I wasn’t expecting to run a second session of this adventure just yet, but was pleased to give Advanced Fighting Fantasy an extended trial run. I’m really warming to the system, it’s very simple and does everything you’d need, plus the magic system is interesting – wizards and sorcerers are powerful even as beginning characters.