A day after the events at Owlbear and Wizards Staff, I’m still coming down from the excitement of it all. Set in the welcoming town of Leamington Spa it promised a day packed with RPG goodness with a bus load of games on offer. The weekend started for me on the Friday night with a visit to a local boozer followed by the delights of Warwick Spice (just to be clear it’s a restaurant with amazing food), the whole evening hosted by the affable emcee Matt Broome. With great company all around I had a chance to catch up with some older gaming pals (I’d like to say old friends because it feels like they are, but I’ve only known most of them 12-18 months!) and meet twitter folk face to face for the first time.

The day itself started early with RPG folk descending on The Band Factory, a rehearsal venue not far from the town centre but free of musical aspirants for the day. The space was perfect, well lit with good sized tables and facilities. Drinks and biscuits were readily available with a load of tasty samosas shipped in at lunchtime. I didn’t have to take more than a step or two to bump into someone I knew.

I was playing Dungeon Crawl Classics in the morning session, expertly GM’d by DCC Judge Lee Nielson. Lee was well at ease with the system and quickly had us up and running through the 0 level funnel. But rather than being the usual fantasy peasants we were ordinary people from the 70’s somehow transported to fantasy land. My characters were a plumber (Mario of course), a taxidermist and a minister… other’s included a corny radio DJ, a drug addled hippy and a retired ex-SAS dude. It was a lot of fun imagining how these characters could rationalise the crazy fantasy world they had been transported to, and how they would feel having seen three of their fellow time travellers slaughtered by alien lizardmen. Lots of scraps and a few traps saw our numbers decimated until we came to the final encounter and bravely won the day. Great game, great GM, great players.

After a chilled lunch spent chatting to some top gaming folk it was onto the afternoon session where I GM’d my Lamentations of the Flame Princess home-brew The Greater Share of Honour, set on the eve of the Battle of Agincourt. It’s a game I’ve ran a number of times at cons and it always seems to go down well. I had an great group of players who really engaged with the game and took to their characters with gusto – I had little doubt they would be able to carry out the King’s orders. On this occasion I struggled to fit the game into the 3hr 30 minute slot, hopefully we’ll be able to pick it up and complete it on Roll20.

There were a ton of other great games on throughout the day – like with most cons I wish there was some time trick we could do that would allow me to play in every game – I’m certain everyone there felt the same. Some of the other games being run included Mutant Crawl Classics, Startrek Adventures, WFRP, Monster of the Week (with the Hookland setting), Space 1889, Genesys, D&D 5e, Shadowrun, HeroQuest Glorantha, Runequest, Numenera, Call of Cthulhu, Fate, Elite Dangerous. 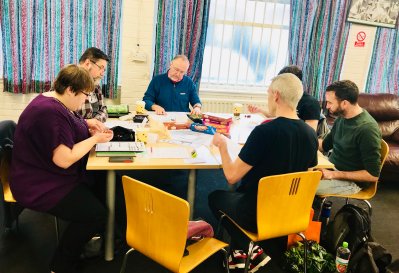 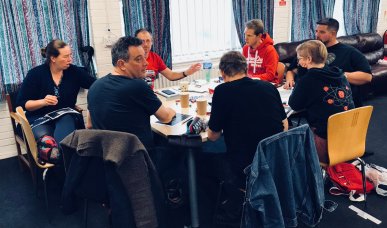 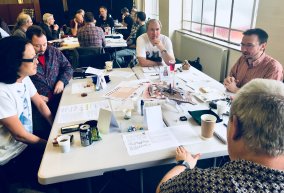 The day ended with a gathering of DCC/MCC GM’s – you wouldn’t want to bump into this lot down a dark alley! Now the countdown begins, only 364 sleeps until the next one!