As we’re getting into the thick of BTAM, here’s the standard spoiler alert; this post has spoilers, if you think you might play BTAM at some point go and read something else (like my Advanced Fighting Fantasy: Gallows End to Hellwinter session report).

Surrounded by the misery and suffering of the refugee camp outside Karlstadt the adventurers consider how they might gain access to the town (their mission being to kill The Seven and take their heads to Wurzburg). Like the thousands of people in the camp who are fleeing the advancing Swedish Army and desperately seeking shelter in Karlstadt and protection from The Seven, there only seems to be one way in. Present yourself before the gates before the one known as The Watcher.

The party spilts to enquire around the camp and pick up some further rumours while avoiding the Burgerfriendensmiliz, the town militia who take a dim view of armed travellers. Miklos’ attention is drawn to a woman who is preaching portents of doom (like anyone around here needs reminding), who with her eyes rolling in her head shouts “the Insect God will devour humanity!” Miklos approaches and learns the woman, Solla Zurzen, once resided in Karlstadt and curses the one known as The Mother. “She killed my cat and has taken children, Ulrike Lamprecht is evil!” Unfortunately Solla is able to recall little about her Insect God prophecies as she made them in a trance like state. She does point out the swarms of insects that seem to be everywhere…

Meanwhile Maldron is approached by a worn and world weary thug who asks if he and his friends are looking for work. He tells the fighter that his boss has observed the group and believes they could help each other out. If so, Maldron should find his companions and meet him under a nearby tree in one hour.

Not far away a despairing woman asks Hemming for help. Through her tears she introduces herself as Clora Machholter and asks will Hemming and his accomplices to save her daughter Lena who has been kidnapped. She found a note at the place she had left Lena for a short and shows the parchment with the demand for 1000 pieces of silver to be dropped at the Braasch farm a few miles away. The money was to be in bags on a mule, the deliverer then leave the farm and a couple of hours later the child would be on the mule. Despite pleading and making offers that showed the extent of her misery and desperation Hemming and the Black Dogs remained focused on their task – finding a way into Karlstadt.

After meeting the thug under the tree the Black Dogs are taken to meet Adred Jaeger, the leader of the self-styled Jaegerstruppe. Jaeger’s criminal business is prostitution, taking advantage of desperate women in the camp and the adventurers take an immediate dislike to him. However, an interesting offer is put on the table; if the party can kill Gabi Tabbecker, the leader of another gang in the camp that deals in smuggling and protection, he will show them a way into Karlstadt. With little to lose at this time the party approach the Tabbecker tent accompanied by one of Jaeger’s thugs Paolo.

It becomes apparent that Tabbecker is just as unpleasant as Jaeger, taking advantage of the refugees, however she is the lesser evil and because they talk to her first she makes a counter offer. Bring her the head of Jaeger and she will give them a safe route into Karlstadt. With the adventurers having taken such a dislike to Jaeger they take this offer and stealthily return to the Jaegerstruppe camp. 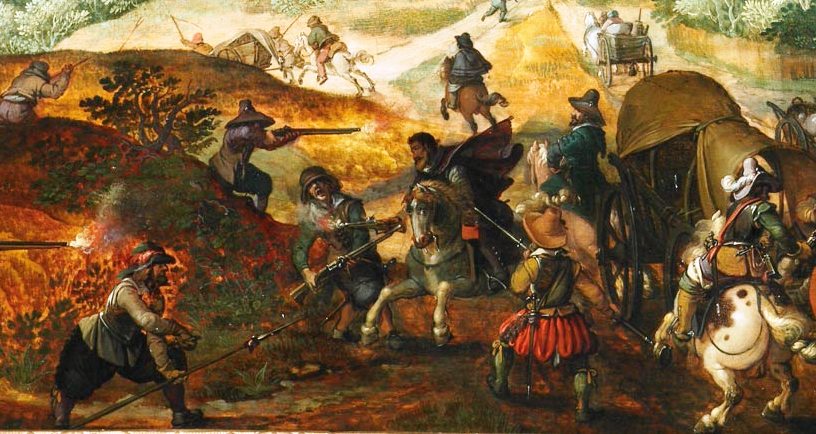 Sniping from the outskirts of the camp Miklos and Balock kill Adred Jaeger with their crossbows and it doesn’t take much for Hemming with his magic missiles to take down and scare away the remaining Jaegerstruppe. They plunder the camp and take Jaeger’s head back to Tabbecker.