After last sessions excitement the adventurers believed they had the poor leprous old lady Olga on the run. Now joined by a hungover Blegrim after his excessive ale binge and after a quick rest and perhaps overlong assessment of the situation they head through the door Olga escaped through, stepping into the Library. A window is open, curtains fluttering in the wind. Had Olga fled the building, or was there more to be discovered? 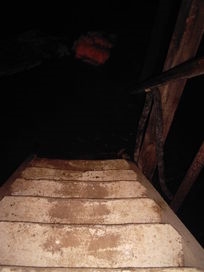 Aware of the strong smell of smoke (Romula had set the kitchen on first last session), while Seneca checks the windows for traps, Romula pulls all of the books off the shelves, revealing an odd panel where the library wall meets the staircase. Charged with smashing the door down, Blegrim spectacularly fails, embedding his axe in a wooden support. Hector charges through the door and manages to keep his balance only to be charmed (again!) by Olga who waits in the basement below.

A giant talking frog sitting in a tub of sludge and a scrawny man held prisoner behind bars add to the strangeness of the scene, then as is all too typical, chaos ensues with Andromeda catching her sling on a nail and ripping it, Romula tossing the cheese wheel down the stairs, Seneca trying to hit Olga with an arrow from her bow and Hector trying to resist orders to kill the rest of the party. Olga summons great skeletal demons armed with great blades, but fortunately Romula is able to turn them, and at the same time Hector breaks the charm and the whole party pile in.

Sensing the end is near Olga retreats but ultimately falls under a barrage of chocolate based Magic Missiles cast by Faqual and strong attacks from Blegrim. The post-decapitation calmness which descends on the scene is broken by the croaking voice of the frog which offers to answer three questions about the local area and so the party learn that Mina does not intend to betray them and that a local rancher, Baron Pavel, requires adventurers to deal with a troublesome matter (there was a third question, but memory fails me on this occasion).

Fleeing the burning house and returning to Mina the party are duly rewarded and have little time to rest (and some level up) before heading out of town to see Baron Pavel.

As was always the case with Lunchtime Lairs we wanted to have rotating GM’s, and so I handed over the GM reins to Andrew, pulled out a character I had created earlier and before too long we were off adventuring again. Andrew’s blog entry on the start of his game is here.

Chatting to the other players, Dave and Sam are both interested in running games, this is perfect and exactly what we wanted Lunchtime Lairs to be. With a bit of luck we’ll get a few more players and could soon have two tables every Wednesday. There’s bags of potential here and lots of scope to expand beyond The Black Hack. I look forward to seeing how it all develops.