Warning: BTAM spoilers ahead! Don’t even scroll down if you intend to play this module

Returning to the conspirator’s house following their assault on the church of St Andreas and the assassination of The Defiler, the Black Dogs decide to rest and recover for the night allowing spell-casters to refresh their spells. The noise of the panicked refugees and citizens of Karlstadt persists throughout the night, while the Milizionäre comb the town door to door searching for the assassins.

The PC’s are awakened by muffled screams coming from one of the ground floor rooms in the house; on investigation Hugo Beck (the head of the conspirators) tells them that a group of militiamen came into the house searching for assassins and all but one were killed by the desperate rebels. The surviving militiaman, a young fellow with a beaten face and broken bones, had been tortured for information on The Seven; what are their plans following The Defiler’s death, where are they all now?

Schemes are formed as Hemming Kristofferson shows his true chaotic nature and gleefully tortures the poor lad for intelligence to help formulate a strategy [there’s something about Lamentations of the Flame Princess that brings out the dark side of players]. The Black Dogs ask the conspirators to start fires around Karlstadt to distract The Seven, while they target The Joy and The Provider*.

The conspirators split up to make movement around the town easier and avoid Burgerfriendensmiliz patrols while Balock, Hemming and Miklos lead a group of conspirators to the Dammen house where they dumped their gear on first entering Karlstadt. Being properly equipped against The Seven is very important after all. Along the way they encounter a patrol and a gang of conspirators peel off to deal with them while the PC’s proceed to the house. Gawinus and Magdalyn Dammen have the house locked up tight and clearly do not expect, nor want visitors – protecting their only son Ruben is their top priority. 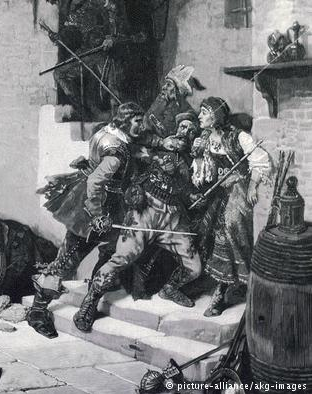 Hemming formulates another plan (one of many) to trick Gawinus Dammen into opening the back door of the property. Approaching the front of the house he bangs on the door, telling Gawinus that some rogues have been trying to break in to the property around the back. Gawinus buys it and opens the back door to the alley. Balock and Miklos hide out of sight while Hemming tries to convince the unfortunate citizen that said rogues forced their way into his basement. As Gawinus takes a look Hemming tries to knock him out, but by now suspecting treachery he attacks the Magic User. A scrap ensues in which the loving husband and father is killed (oops) and as a result his distraught family have to be coerced into keeping quiet (poor Magdalyn quietly sobbing and Ruben asking for Papa) while the party recover their gear.

Now properly equipped the Black Dogs lead a mob of conspirators to Zum Erleuchteten Hurenbock, the known location of The Joy. As the mob approaches the whorehouse the workers loitering outside panic, run inside and shut the door, but The Joy (the only one of The Seven to have given away her creature) steps outside to challenge them. She is given little opportunity before she is struck down and her head hewn off, to be tied by the hair to Miklos’ belt. The conspirators are even more fired up – taking down The Seven is going to be easy! 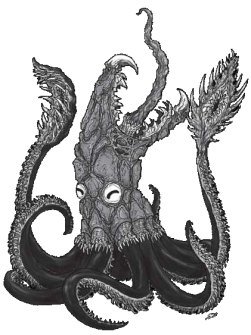 Moving on to The Providers house they find the front door open and a seemingly empty reception room within.  Appetising smells drift from the back of the house. The party carefully enter with a handful of conspirators and (no surprise!) are surprised by The Providers creature, a tentacled, octopoid nightmare that rips the arm off one conspirator and the face off another. In the grim combat that follows Balock, Hemming and Miklos are all injured, the creature is hard to hit and damage and some power of the creature prevents Hemming from casting spells. With the end of the party in sight, just in time they remember the Leg Bone of St Burchard, a holy item believed to have the power to smite demons, and once used it changes the balance of the encounter somewhat. Just as it looks like they are making headway against the monstrosity The Provider herself steps out from the kitchen and joins the fray…

* For context, The Provider is a convivial, caring, warm woman, rather overfond of food, who feeds the starving refugee populace of Karlstadt every day. And our ‘heroes’ want to kill her…