Last session we ended mid combat with Miklos and Balock scrapping two of the Milizionäre in the church of St Andreas while attempting to retrieve the Leg Bone of St Burchard (a supposedly powerful relic) from the crypt. Maldron and Captain Hermann (a long term NPC companion) found themselves swallowed by The Defiler’s Creature and existing in some weird dimensional inner stomach, Hemming arriving on the scene to witness this disturbing chow down before the bipedal nightmare turned it’s attention on him.

“Never split the party” is a common maxim frequently heard amongst roleplayers, particularly adherents of OSR. Perhaps less frequently heard, is “Don’t take a knife to a gunfight”, still very sound advice. Our adventurers in this instance, partially through circumstance and otherwise through choice, decided to split the party while they were very lightly armed (due to the weapon ban), arguably giving short shrift to both these pieces of advice. 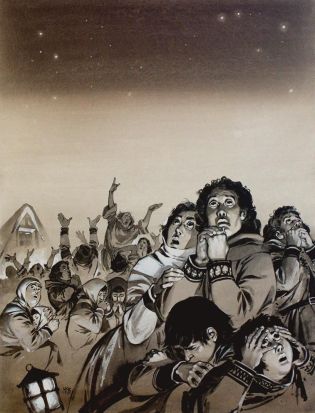 With most of the Milizionäre falling for The Black Dogs ploy of stirring up the populace with rumours of imminent Swedish army arrival, Balock and Miklos, dressed themselves as Burgerfriedensmiliz and fought and killed the two remaining guards. The two doors into the church were quickly barred and rogue and priest started to investigate. Balock discovered stairs leading down… to a crypt!

Meanwhile Hemming appears on the scene having pushed through the panicked crowd of refugees and citizens, arriving just a little late to save Maldron and Captain Hermann. His years spent pouring over dusty arcane tomes in the libraries of Stockholm pay dividends as he understands the nature of The Defiler’s Creature and there may be a chance for Maldron and Captain Hermann to survive. All he has to do is not kill the creature and stay alive himself while it chases him.

Big spoiler: when The Defiler’s Creature successfully hits, it causes 1hp damage and the target is ‘swallowed’, appearing in an area with another copy of the creature. If this creature is killed the victim returns to the previous ‘level’, but if hit again they suffer 2hp of damage and go down another level to face another fresh version of the creature… and so on. Because I thought it would be too much faff for each character to end up in their own version of the stomach, I had all present swallowed on a successful attack by the beast.

In the 1st level of stomach dimension inside the creature Maldron and Hermann fight for their lives, regretting having brought weapons no bigger than a pistol (used as a club) and a shortsword. They develop a tactic – one of them taunts the creature and takes on a defensive stance for +4AC while the other strikes from behind with +2 to hit; this works to a degree, but all it takes is one hit from the creature to send them down a level.  And that happens more than once… 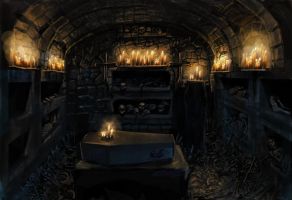 Back in the church Miklos and Balock head into the crypt, discovering a passage with the traditional sarcophagus’ in alcoves (nothing to worry about there), a small earthen tunnel leading away (perhaps to the graveyard) and behind bars the object of their mission – the leg bone of St Burchard! As they grab the bone and prepare to make their exit they can hear heavy stone shifting on heavy stone, what can it mean?

Hemming tries to lead The Defiler’s Creature towards the Milizionäre who are gathered around Emma Gäbges (The Defiler) having heard her scream. The Magic-user’s hope is that the creature will attack the guards, but before the opportunity arises there ensues a game of cat and mouse with Hemming deftly leaping over the cemetery railings and hiding behind gravestones. Realising his ploy isn’t going to work he takes the opportunity to attack The Defiler, sending forth screaming skulls which tear at her flesh, leaving only part of a skeleton and her head in tact, a look of sheer terror on her face as the undead she has feared for so long have come to get her. Taking advantage of the stunned guards Hemming runs away into the darkness while the creature is drawn towards The Defiler’s remains. Knowing some of the other Black Dogs are in the church he tries to gain entrance but is unable to (because Balock and Miklos barred the doors).

The battle to get back to reality continues with Maldron and Captain Hermann going up and down levels, their endurance wearing down as they take more and more damage.  At one point it seems like their tactics might just work, but the hand of fate is against them and as an attempt to taunt the creature fails, it attacks Hermann and devours him – this time Maldron is all alone when he goes down a level. Now with 3hp left and 5 versions of the creature still to fight Maldron resigns himself to his fate and charges at the monster, sword raised high…

Sensing an ominous presence in the crypt of St Andreas, the two tomb robbers decide to run leaving behind a chest that may have contained a load of gold (they didn’t even try to open it!). They run out of the church and into the night, finally catching up with Hemming and returning to the Conspirator’s safe house. No doubt they will wait for many hours to see if Maldron and Captain Hermann turn up, but in time realise that is never going to happen…