A week can be a long time between RPG sessions, more so when it’s LotFP and we left the adventurers languishing in the grip of the one known as The Joy. Perhaps it was inevitable that they would get cold feet and decide that they had enough information for now… however, they still have one job to carry out. One of them has to hide in a grave in the cemetery and scare the hell out of Emma Gäbges when she comes crawling around after dark.

Their attention turning back to acquiring the leg bone of St Burchard of Wurzburg, believed to have powers against demonic creatures and hidden in the crypt under St Andreas church, they leave the brothel behind and spend quite  some time formulating a plan. Causing a distraction to draw the Milizionäre away from the church seems to be a popular choice and so guided to a degree by Hugo Beck, the leader of the conspiracy to overthrow The Seven a plan slowly starts to form…

Waiting until well after the sun has set, wearing the uniforms of the Burgerfriedensmiliz and equipped with concealable weapons, the Black Dogs split into three; Maldron heads northwest of the cemetery, Ballock and Miklos northeast while Captain Hermann (the NPC watchman from Wurzburg) agrees to hide in the shallow grave, planning to frighten The Defiler when she comes near. Everyone in place, some time passes until Emma Gäbges approaches the cemetery on her nightly patrol. 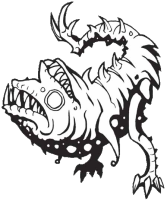 A while later The Defiler appears with her creature, a strange thing with two mouths, the size of a big dog hopping along on two legs. Those nearby can hear the creature muttering something in what sounds like Spanish. As planned Captain Hermann startles The Defiler, makes her scream… and once more all hell breaks loose.

Time running out we ended the session mid-combat with all of the PC’s in desperate situations. Will they be able to survive next session?