Having gained favour with the smuggler Gabi Tabbecker the Black Dogs find themselves sleeping in a farmhouse not far from Karlstadt with access to a tunnel they can follow into the town itself. They are rudely awoken by Gabi who gives them advice; avoid The Seven and their creatures and remember weapons of any kind are outlawed. Walking around looking like adventurers will get you in trouble.

The tunnel leads to the basement of a house at the northern edge of the town; last time it was used the building was empty but now it seems a family have moved in. Deciding they don’t want to be discovered the Black Dogs narrowly escape detection when Magdalyn, the wife of Gawinus and mother of Ruben (or so they believe having listened in on their conversations) comes into the basement for food supplies. A while later with various chores pressing the family leave the house, securing it on their way out.

Tough decisions are made about what gear to take onto the streets of Karlstadt and those with chainmail armour leave it behind along with all of their weapons. Even Maldron reluctantly leaves his two handed sword behind. Hemming takes his quarterstaff believing he can convince any who question him that it he needs it to walk. Because that would be rational, and there is an abundance of rationality in Karlstadt right now. 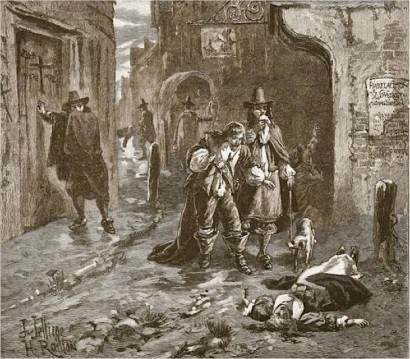 Hemming unlocks a padlock on the back door of the house and Balock unlocks the door itself and within no time the party are out on the streets of Karlstadt.  The many buildings of the town are overflowing with refugees, and many are living on the overcrowded streets; all seeking safety from the Swedish army.

The air still thick with insects, the stench of effluent and human misery, our adventurers spend some time exploring the burgeoning town and as part of their investigations learn:

With tentative plans for next session of a visit to The Joy (that is going to be fun!) and checking out the Bauer House plus with Gustavus Adolphus and his boys likely not too far away now, getting the heads of The Seven is looking like a tall order.