The usual Better Than Any Man spoilers warning goes with this.

With A Stranger Storm drawing to an end and their changeling woes behind them (for now) our 17th Century adventurers head onto the Ochsenfurt to meet their contact Nicklaus Stein. Upon arrival at The Charming Pilgrim, a rundown roadside tavern they discover that Nicklaus has moved on to Wurzburg to gather information. Portents of war can be seen with occasional refugees fleeing south, their carts loaded with all their belongings, fear and sorrow on their faces. The Swedish army is on the way. Spending the night in the Flagon and Bear inn inevitably leads to conversations with the locals and the PC’s learning that there seems to be an annoying infestation of insects that have been bothering people since the summer (it is now October).

Fully rested the group set off for Wurzburg, a journey they hope to complete in half a day. All is well until they encounter a group of itinerant armed peasants lead by a fanatical priest who has fuelled the ire of these good catholic folk against protestants, witches, foreigners and enemies of the empire. He asks if the characters if they will swear an oath of allegiance to the Emperor Ferdinand II and to Pope Urban VIII. While Miklos makes an attempt to reason with the priest it is clear his fervour is too great and rational thought is beyond him. He asks Balock to kiss his crucifix, but not being one to take this kind of manipulation readily, Balock attempts to stab the priest. Combat is about to break out with the peasants readying pitch forks for the attack when Miklos cracks the priest on the temple, knocking him out. The peasants morale breaks and they back off, ready to run. The encounter ends with the peasants fleeing, the bruised and battered priest on their tails. 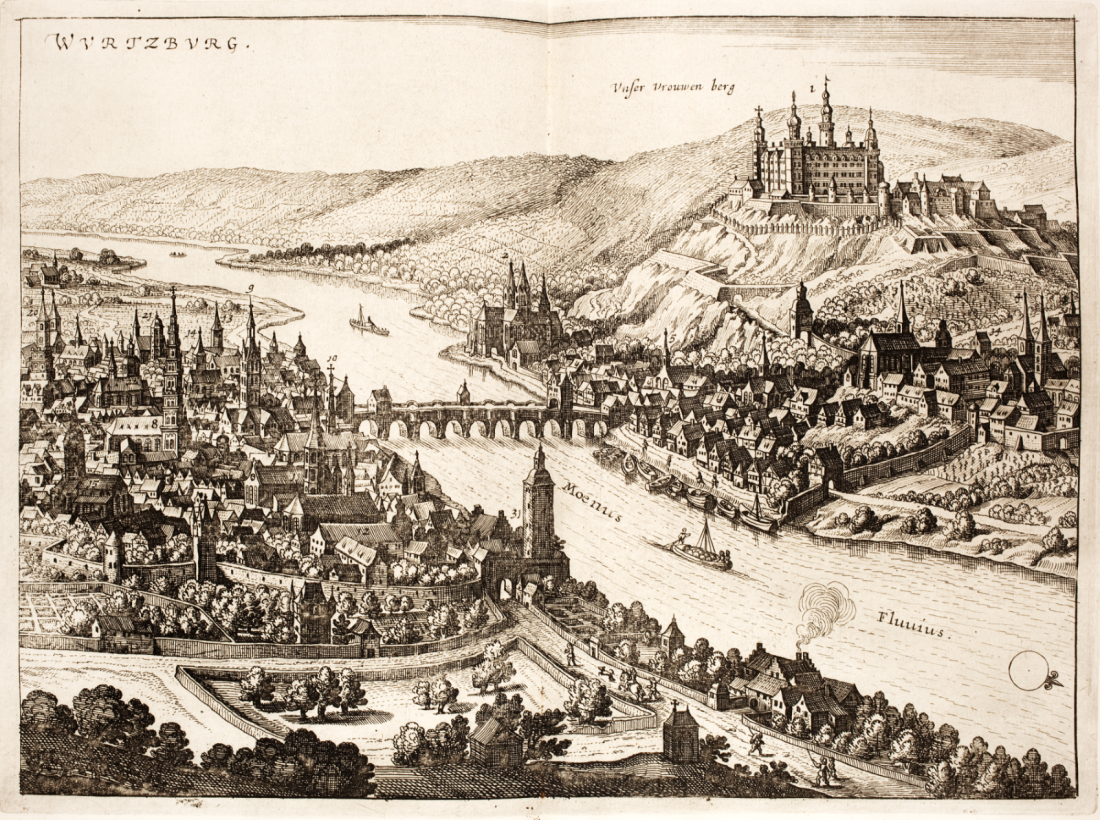 The delights of Wurzburg await, it’s crenellated walls overshadowed by the magnificent Marienburg Fortress on the other side of the Main. Approaching the town they encounter witch trails, a common occurrence in these desperate times with women held in pens like common animals. Overseen the Prince Bishop Franz von Hatzfeld, these unjust and brutal procedures see victimised women doomed with no route out – admit your guilt or face a trial by ordeal: dunking in the nearby pond. Drowning proves your innocence, if you survive it is by witchcraft. Those determined guilty of witchcraft, either through their own admission or surviving the trial by ordeal are hanged.

The adventurers observe these horrific trials, but are unable to intervene with a crowd desperate for entertainment and the Prince Bishop’s guard keeping an eye out for trouble. When the guard start turning their attention to these armed adventurers they move on and find their way to the Flask and Sword inn on Wagner Strauss, the new meeting place with Stein.

Making contact with Stein, he asks them to meet in his room where he tells them of The Seven, the Sorcerers of Karlstadt who are accompanied by their own creatures. It is only recently that these Sorcerers have come to power and their creatures have appeared. Stein wants the adventurers to deal with The Seven and suggests they check the noticeboard in the town square as there is a notice there from the Prince Bishop about the same matter. The party determine to rest the night before further exploring Wurzburg and checking out the noticeboard.