This week we had a full contingent of players, with Graham joining us as The Captain. Once more there are spoilers if you intend to play A Stranger Storm or Better Than Any Man.

Last weeks session ended with a pile of five dead changelings stacked in the kitchen of The Incontinent Vicar and a common room full of survivors. While still preventing any of the entertainers, merchants and locals from leaving the inn, in order to determine if there were any more mimics Miklos the Cleric rested and regained his spells including Detect Evil, which the party had been lead to believe would identify the tricky creatures (as well as magic-users, who are chaotic by nature). 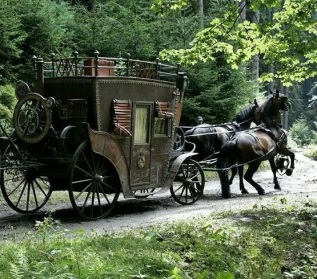 Now late afternoon of the second day of their adventure, the PC’s marched the other guests out into yard by the stable because they also suspected that the horses may be changelings (although now there were only 8 of them left). The Detect Evil spell revealed no mimics, and so everyone was left to go on their way – the entertainers heading back the way they came, and the locals returning to their village. The two remaining merchants were continuing on to Wurzburg via Ochsenfurt in their coach and the party ‘encouraged’ the merchants to offer them a lift. Now many hours late for their meeting with Nicklaus Stein and with no sign of the storm letting up, they are at least moving in the right direction.

The muddy road makes travel slow and as light starts to fade they encounter four mounted knights heading in the opposite direction. Their leader, Sir Boris Corsica, asks the PC’s where they are headed and informs them that he is from the Order Medical and seeking shelter for the night having dropped 20 orphans of at the nearby orphanage of St Petra’s. They part ways, the knights riding off in the direction of the Incontinent Vicar and the grim scene that was left there.

Continuing on towards Ochsenfurt through the evening, a short while later they encounter another traveller, Sister Bärbel Zimmerman from the nearby orphanage of St Petra’s. Sister Zimmerman asks if the party have seen knights on the road; they only left paperwork for 20 children, yet there were 21 dropped off earlier in the day. Getting a sense of what was going on, the party left her to find the knights, but with it getting darker and no sign of the rain letting up, a decision is made to stop over at the orphanage.

The PC’s are not allowed into the orphanage as understandably the nuns are nervous about a group of armed travellers, but they offered sleeping space in the stables, where they are able to dry off at least and eat some of the food the acquired from the inn. Watches are set and as the rain starts to ease off the German countryside grows quiet…. until shouting is heard from the front of the orphanage.

This is where it gets chaotic:

The session ended in the orphanage – will the group now move on to Ochsenfurt, or is there still more evil to be uncovered here?

One thought on “Better Than Any Man: Save the Kids!”