Last session we left our heroes in a diseased flesh filled underground cavern which they had set on fire while trying to rescue Olga’s daughter Mina from Elias Goldtongue and the psychic space beetle. Andromeda was able to slap Faqual out of his brain addled state and they were both able to help Romula free Mina while Blegrin showed his love of axe work and set to on Elias and the beetle. Unfortunately the beetles teleportation ability allowed it to get behind Romula which it then took out of action. 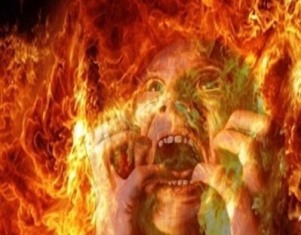 The situation was looking desperate, Andromeda making a frantic bid to escape with Mina when Blegrin hoisted Elias over his head and cast him into the flames. Consumed by fire the evil cleric writhed and screamed and the beetle disappeared. The group deduced that Elias had summoned the beetle, and that’s why it disappeared when he was killed, but they haven’t yet considered that maybe Elias wasn’t the mastermind.

With little time to spare as the city watch closed in on the temple the group fled and returned to the Pigs Stick and Carrot tavern where their adventure had started. Their intention of returning Mina to Olga her ‘mother’ was questioned when Mina told the party that Olga was really her evil aunt who needed her alive to get access to her inheritance. Refusing to hand over Mina to her aunt they took her to a different tavern to decide what to do.

Mina told them her story, how her aunt Olga wanted to get her hands on her fortune, left to her when her parents died. Now Mina has offered them a handsome reward to bring her Olga’s head. The session ended just after our heroes had staked out Olga’s mansion. Will they be able to call themselves heroes any longer if they are willing to behead a leprous old lady?