After a slow paced start to Lunchtime Lairs last week with much investigation, reaching out to contacts and trying to discover just what the hell was going on I had expected there to be a bit more action this week.  I wasn’t disappointed, from kick off axes slashed and heads rolled.

Before I get into more of that though I have to mention our players.  Twice as many as last week – if we carry on like this I have no idea what we’ll do.  Bar room brawl anyone? In addition to myself, Clarky (Romula the Cleric) and Matt (Andromeda the Thief) from last week we were joined by Dave (Faqual the Sorcerer), James (Fean the Quick, a Thief) and Alex (Blegrin the Warrior).  Perfect.  With characters chosen and a quick explanation of the rules (which takes all of 5 minutes) we were underway.

The new players were brought up to speed with a summary of the previous session and the current plan.  It was a sensible plan; stake out the temple and look for an opportunity to get inside, maybe taking out a guard or two, while other party members would investigate the diseased pustules appearing in parts of the slums.  While Romula and Faqual visited the Sisters of Mercy, a benevolent religious order caring for the poor and sick and lead by the mysterious Brother Eldritch, Blegrin, Andromeda and Fean observed the temple. 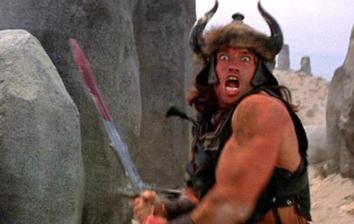 Everything was going according to plan until Andromeda and Fean where disturbed while peaking through a window and Blegrin took the opportunity of a distracted guard to chop his mates head off.  Thus combat was entered and chaos ensued.  Blegrin quickly found himself outnumbered by guards and their captain, while the thieves took out a guard at the rear of the temple and quickly found themselves embroiled in a combat with more guards, their leader Elias Goldtongue and huge hairy psychic beetle.  Faqual arrived and was slinging about sleep and charm spells with mixed results, and so we had to end the session there in mid combat.  There’s no doubt the party are in a tricky situation.

And where was Romula while all this was going on? After an losing her lunch emptying a bucket of filth and vomit she had to get some rest, convenient as unfortunately Clarky had to leave early, real life once more proving that it is far less fun than living in an imagined fantasy land.

The Black Hack in combat 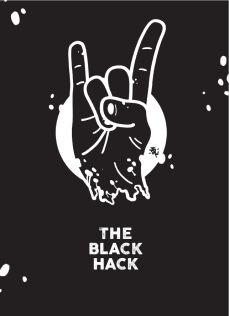 I was interested to see how combat would work with the Black Hack and with the rest of the session being one long scrap we were able to take the rules through their paces. There are some clever ideas in the rules, for example, to determine initiative players must pass a Dexterity test (roll under it), with a success meaning they get to act before the bad guys and a failure meaning they act after.

To score a hit with a weapon the player must roll under their characters relevant attribute with various modifiers, Strength for melee attacks and Dexterity for ranged. Attributes are the gold standard and created as nature intended. Damage is based on class, for example a warrior always does 1d8 damage with an axe or dagger.  When a monster or NPC attacks a character the player rolls for them to avoid the attack, with a +1 to the roll for each level the enemy is above the character.  A couple of the characters had Strength of 16 which meant they had a 75% chance of hitting, and also a 75% chance of avoiding being hit.

The armour system is unique, I’ve not seen it any other systems.  Each item of armour has a number of points which reduce damage, but once used they are spent until the character takes a one hour rest. Leather armour has 4 points, Chain Mail 6 and Plate 8.  After a couple of hits armour is generally depleted and anything beyond that comes straight off the characters hit points.

The characters were very effective in combat, with the percentages being in their favour, but when they do get hit their armour quickly diminishes and they are much more exposed.

Sorcerers and Clerics (from level 2) have spell slots which they can either fill with remembered spells or use with any spell from their spellbook. After a spell has been cast they have to test their Intelligence or Wisdom, with the spell slot being retained on a success. This meant that Faqual the Sorcerer with his single level 1 spell slot was able to cast a number of spells – sleep a couple of times and charm person.  It’s a neat idea, but I can see a situation where a Sorcerer at higher levels rarely runs out of spells and is just blasting through everything.

All great adventures have the odds stacked against the heroes and that’s just what we have here.  Will the characters survive next weeks session or will it end in a Wild Bunch style TPK?

If you’re interested in Lunchtime Lairs and can get into Liverpool city centre between 12 and 2 on Wednesdays get in touch with either Clarky (@DissectingWrlds on Twitter) or myself via this blog or @nfbenson on Twitter.