Today myself and Andrew Clark (@DissectingWrlds) started Lunchtime Lairs, our attempt to fit in weekly short RPG sessions.  The venue was Just Play in Liverpool, the time 12-2.  As part of our planning we had decided on a generic fantasy setting and a simple system – The Black Hack – the idea being that all adventures would be short and completed in a single session. Then anyone could step up and GM the following week.

We had one other player turn up (Matt, a chap I work and whose ear I have bent about RPG’s for some time) for a total of two players and a GM.  Taking on the GM role for this inaugural meetup, I had determined to go for light preparation with theatre of the mind delivery which is very much not my usual approach or style of GMing.  For ideas I turned to Frog God Games Tome of Adventure Design; there are many products of this type around, but this one is fairly comprehensive and gave me more than enough idea to get started. 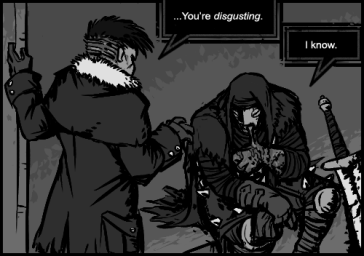 Andromeda the Thief and Romula of the Red Hand (a Cleric) were our characters, rolled up in the first half hour.  Within no time they were in the employ of Olga the leper, a merchant struck down by the disease; their mission – to recover her daughter, Mina, who has disappeared into the Temple of Joy and Serenity, drawn in by the preaching of the priest Elias, the warden and keeper of the temple.

Tapping into underworld contacts a dark picture unfolds, poor and vulnerable folk from the slums are being drawn to the temple and disappearing within.  Worse still, pockets of diseased, pustulent flesh have been seen clinging to the walls of building in the slums, exploding and spreading disease.

The duo stake out the temple and learn something of the movement and patterns of it’s inhabitants.  Carefully they lay their plans which shall be put into action next week…

With one new player to RPG’s, a fairly cautious approach was adopted, so this first session was largely discovery and planning.  We only scraped the surface of the Black Hack rules with a handful of ability checks – I like the roll under stat mechanic; whether it has any significant shortcomings is yet to be seen.

I’m looking forward to next weeks session; seeing how the party approach the temple and testing out the TBH combat system.